Drummondville’s grand seduction: A Quebec town rolls out the welcome mat for immigrants

The mayor waited outside the hotel for the bus to pull up, then bounded aboard to greet his VIP visitors from the four corners of the Earth. “It is with great pleasure that I welcome you to Drummondville!” Alexandre Cusson boomed to his surprised guests.

These were no global bigwigs with cash to invest. They were 31 newly minted Canadians being wooed in an all-out charm campaign to get them to put down roots in this small city 100 kilometres east of Montreal.

By day’s end, the group would be greeted by the mayor, whisked around on a guided city tour, treated to a three-course lunch and taken on factory visits by eager managers.

“I feel like a star,” said Houda Idoudi, a 36-year-old administrator from Tunisia. “All that was missing was

he outing was organized by the Federation of Chambers of Commerce of Quebec as part of an initiative some people nickname La Grande Séduction, after a 2003 Quebec film in which a fishing village pulls out all the stops to lure a doctor to town.

Quebec often makes headlines because of its wrenching discussions over the place and rights of minorities in the province. Immigration remains a contentious issue, and the leader polling to be the next premier, François Legault, favours lowering immigration levels and testing newcomers on Quebec values.

Yet the anti-immigrant rhetoric masks a different reality on the ground. Record low unemployment in Quebec has led historically white, francophone communities outside Montreal to turn to immigration to fill jobs. Far from signing on to decreased immigration levels, municipal leaders see immigration as a way to save local businesses, and, by extension, their towns’ futures. 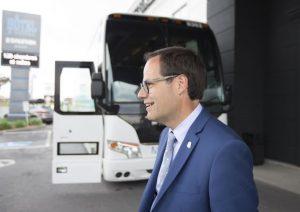 The bus tour to Drummondville this past week was the sixth in a series of visits to regions of Quebec organized by the business federation, which began the program last fall after addressing simple math: More than 80 per cent of immigrants to Quebec settle in Montreal, but 55 per cent of jobs are outside Montreal.

Businesses in regions outside the province’s major city were crying for help.

Unemployment in Drummondville, a manufacturing centre of 77,000, is around 5 per cent. A severe worker shortage was causing companies to stall projects and cancel contracts. Their problems are exacerbated by Quebec’s distinct demographic forces. The work force is aging more rapidly than elsewhere and the birth rate is among the lowest in the West.

Enter a skilled set of workers: computer programmers, accountants, engineers, administrators, many of them seeking their first work opportunity. Drawn from places such as Iran, China, Colombia, Morocco and Cameroon, they had all chosen to live in Montreal, the province’s only real international city.

Most had never heard of Drummondville, much less been there.

But they were open to change.

Franck Rakoto, a computer programmer, hoped he would find work, though he wondered whether he would be the first person from Madagascar to set foot in Drummondville. Majid Atif, a native of Morocco with a management degree, was eager to get a job and see another part of Quebec. “I left my homeland to improve my situation. After travelling so far, a few more kilometres won’t make a difference.”

On board, an official from the business federation, Benoît Malric, tried to put the travellers at ease with lighthearted local lore. He told them that Drummondville was in a rivalry with nearby Victoriaville as the birthplace of poutine.

Mr. Malric also broached more serious topics: He told them that outside Quebec, Canadians adhered to a policy of multiculturalism, where different ethnic groups co-habitate. Quebec’s model for integration was “interculturalism,” in which everyone was expected to understand the province’s values and identity.

After disembarking from the bus, the travellers sat down in a hotel ballroom for short, prearranged interviews with prospective employers – everything from a hotel to an industrial plant to the Desjardins financial group. Jobs on offer ranged from chambermaids and machinists to customer-service agents and industrial engineers.

Zied Touzani, a 33-year-old software engineer from Tunisia, thought he’d face less competition for jobs than in Montreal, where he had been sending out five job applications a week, without success. As he rotated through a series of interviews in Drummondville, he felt wanted.

“I feel like they’re trying to convince me to come here to work for them, like employers here are aggressively courting us. It’s really gratifying.”

Later, the group was welcomed with handshakes by a receiving line at Soucy, a manufacturer that has landed a multimillion-dollar contract for a rubber-track system with U.S. agricultural machinery giant John Deere. The company has about 100 jobs to fill, starting at $18 an hour for unskilled labourers to competitive salaries for engineers and marketing analysts.

Annie Ducharme, director of human resources at Soucy, said companies in Drummondville have no choice but to look outside for staff. “Drummondville is expanding. If companies start stealing one another’s employees, we’re going to end up hating each other.”

Some of the passengers from Montreal admitted they were nervous heading to Drummondville, fearful that, as minorities, they wouldn’t be welcome.

In fact, like other regional cities around the province, Drummondville is slowly becoming more diverse. Grocers selling Latin American specialties have opened in town, a Muslim community centre operates and the Drummondville diversity festival this spring featured the flags of 60 nations.

Still, no one would mistake it for Montreal, or any major North American city for that matter. Karima El Ouali, who arrived in the city from Morocco this year and wears the Muslim veil, says she gets stares on the street. “They look at me up and down like I’m a ghost,” the 25-year-old said. “I think they’ve never seen someone in a headscarf. My friends told me I’ll never find a job here because I wear one.” She said she will stay in Drummondville if she finds work. “Otherwise, I’ll go to Montreal.”

How effective is the outreach program? Since the launch last November, dozens of jobs in various regions of the province were filled by the immigrant Montrealers. The Liberal government of Philippe Couillard is spending $3-million to extend the program for three years, and the Premier cites economic growth as the argument for higher immigration. Mr. Couillard says Mr. Legault’s proposed decrease in immigration would leave thousands of jobs unfilled and be disastrous for the Quebec economy.

Only days after the bus trip to Drummondville, four people who had participated had already decided to pull up stakes in Montreal and move there. It appears the great seduction was marking its first successes. 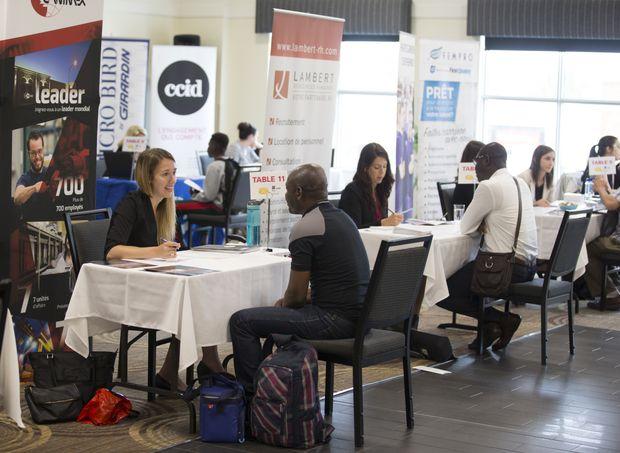 Selected applicants sit down for short, pre-arranged interviews at a hotel ballroom in Drummondville. 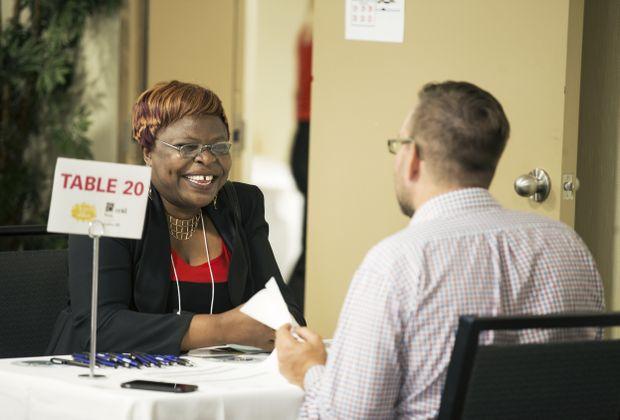 Adjoavi Houndjame, left, sits down for a meeting with a prospective employer.

Karima El Ouali from Morocco makes notes after a meeting with potential employers. She says she’ll stay in Drummondville if she finds work there. ‘Otherwise, I’ll go to Montreal.’